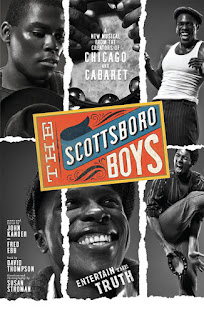 To see videos of this production go to “The Moving Picture Show”
“The production, guided with elegant simplicity by director-choreographer Susan Stroman, unfolds with rapid fluidity on a stage that scenic designer Beowulf Boritt outfits with a dozen chairs and a few boards, which are inventively rearranged to represent a variety of locations. And, as lit by designer Kevin Adams, the illusion of shifting from boxcar to jail cell to sun-filled courtroom is complete... such as in "Electric Chair," in which the youngest of the accused (a remarkable Cody Ryan Wise) imagines his demise; this sequence is also a highpoint of Stroman's inventive choreographic work.”
in Theatremania.com by Andy Propst

"...“The Scottsboro Boys” is a masterwork, both daring and highly entertaining, and director/choreographer Susan Stroman (“The Producers”) has given it the best production possible at the intimate Vineyard Theatre. The book (by David Thompson), score and staging are so organically linked, you can’t imagine one without the others... Using only some chairs to suggest a train, a jail and a courtroom, Stroman follows minstrel conventions to tell the story. Juxtaposing deep emotions and often exaggerated gestures, she creates a mood that feels straight out of Brecht and Weill...Paradoxically, this makes the piece feel incredibly modern. It’s certainly more provocative than most self-consciously “edgy” rock musicals, as the creative team and its fearless, irreproachable ensemble constantly push the audience to the brink of discomfort -- while dishing out one catchy number after another."
in The New York Post by Elisabeth Vincentelli 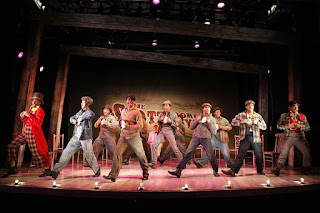 "Directed and choreographed with dazzling verve by Susan Stroman, the show uses the minstrel tradition as a destabilising narrative device... Ms. Stroman offers some of her most effortlessly vibrant work since “The Producers,” exploiting a minimal set by Beowulf Boritt — a series of girdered prosceniums and an array of silver-painted chairs — to conjure the airy freedom of train travel, the claustrophobic terrors of prison and the raucous atmosphere of the courtrooms. Although the show’s momentum is hampered by both its essential singularity of tone and the tortuous history of the court cases, the production remains dynamic, thanks in no small part to the dauntless energy of the terrific cast, all fine singers and dancers."
in The New York Times by Charles Isherwood (Broadway production) 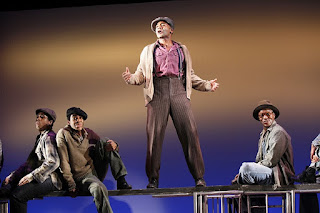 "...The minstrel-flavored routines that propel the narrative tend to lack the sharp, savvy ear of Kander and Ebb’s period pastiche numbers in earlier musicals (or the wit of Ms. Stroman’s winking choreography for “The Producers”). And you may find yourself thinking of more trenchant and imaginative use of minstrel-show devices by other artists, including the Wooster Group (with its black-face “Emperor Jones”) and Kara Walker (whose cut-out paper silhouettes are brought to mind by a shadow-play sequence)..."
in The New York Times by Ben Brantley 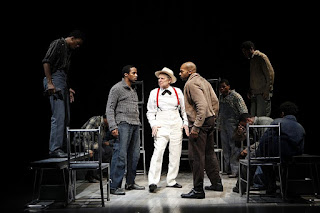 “Director and choreographer Susan Stroman, who learned about staging a taste-challenged musical with “The Producers,” is in top form here... With little more than ragged costumes, a handful of straight-back chairs and a few planks and curtains (the minimalist costumes and set are by Toni-Leslie James and Beowulf Boritt, respectively), Stroman fills the tiny Vineyard stage with razor-sharp vaudeville dancing and, with musical director David Loud, soaring music, some of Kander and Ebb’s best."
in bloomberg.com by Jeremy Gerard 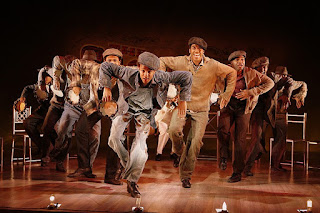 “... under the inspired direction and choreography of Susan Stroman, such minstrel conventions as the interlocutor (sort of a Dixie-tinged master of ceremonies) and two comic sidekicks called “endmen” are put to good use in conveying the story told by book writer David Thompson... The show is scenically spare, but the lack of clutter gives Stroman more room to maneuver on the small Vineyard stage. A lineup of chairs — plus maybe a few tambourines — are all she needs to get “The Scottsboro Boys” to move.”
in SFGate by Michael Kuchwara 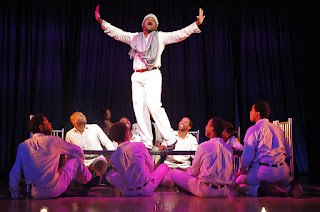 “In addition to riveting material and toe-tapping songs shot through with wry humor, the Vineyard Theater premiere also benefits from a tremendously talented cast of song-and-dance men, from music director David Loud’s luscious vocal arrangements, and from the muscular staging of directorchoreographer Susan Stroman, working at the top of her game... Every song has a purpose, and even in the most buoyant explosions of Stroman’s period-flavored choreography, dance is fully integrated into narrative in a show that packs dazzling physicality onto a small stage..."
in Variety by David Rooney 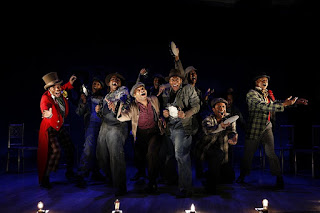 “...Stroman’s staging tumbles with a clownish grace that is often mesmerizing. Although a few of the numbers are extraneous to the narrative build of this two-hour, intermission-less show, most have an impressive showbiz-flair. You may hate yourself for enjoying these incongruously up-tempo songs, but they’re not easy to dismiss..."
in Los Angeles Times by Charles McNutty (Broadway production)

“Rarely have I been so irked by a Broadway show as I was by "The Scottsboro Boys," which has moved uptown after a much-praised Off-Broadway run. This musical, in which the story of a horrific miscarriage of racial justice is retold in the form of a Mr.-Bones-and-Mr.-Jones minstrel show, is one of the best-staged productions ever to come to Broadway. It is impossible not to be thrilled by the electrifying craftsmanship of Susan Stroman, the director and choreographer. The period pastiches of the John Kander-Fred Ebb score are cunningly wrought, and the ensemble cast, led by John Cullum and Joshua Henry, is as good as it could possibly be. (Mr. Henry, in particular, is surely destined for a Tony nomination.) The problem is that all this formidable talent has been enlisted in the service of a musical so smug that I could scarcely bear to sit and watch it...”
in The Wall Street Journal by Terry Teachout (Broadway production) 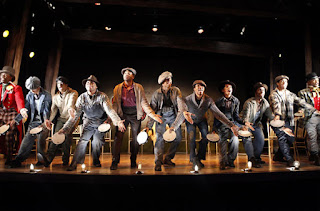 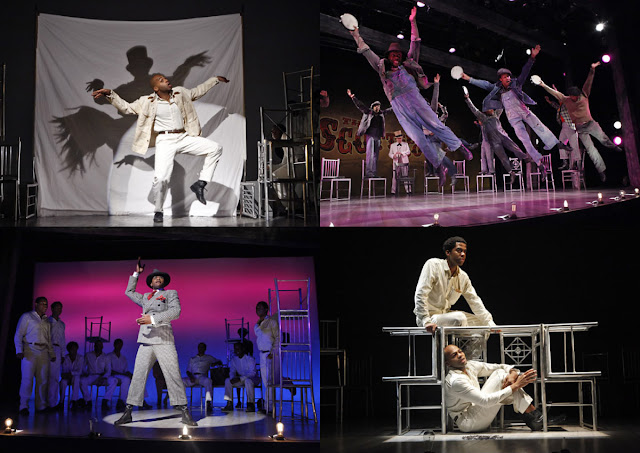 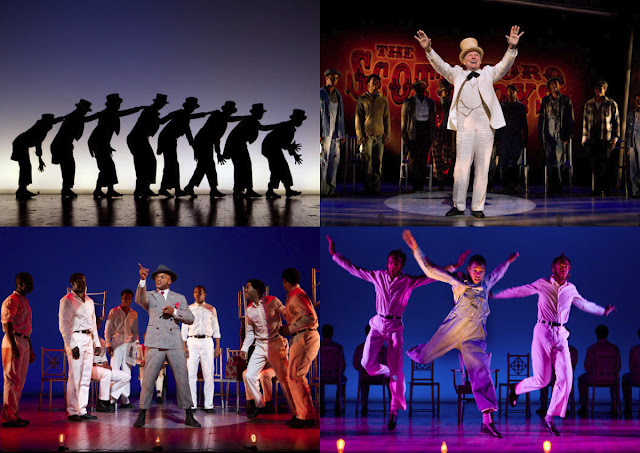 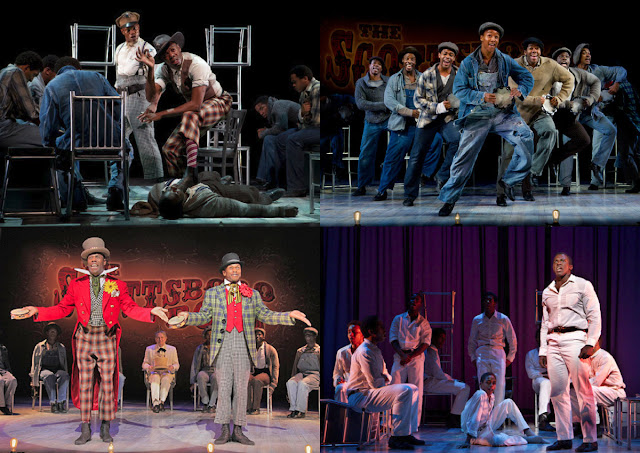