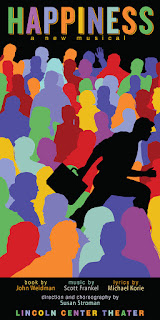 “For a sweet little fable about the need to seize the day and savor each moment, the new musical HAPPINESS at Lincoln Center's Mitzi Newhouse Theater sure packs a lot of pizzazz. It's the product of a dream team: book by John Weidman, music by Scott Frankel and lyrics by Michael Korie (of Grey Gardens), and direction and choreography by Tony Award winner Susan Stroman. While the foremost pitfall of an exercise of this sort, beyond miniaturizing major themes, is the tendency to sappiness, the creators and their superb cast skirt both dangers with unceasing snap and polish…"
in theatremania by Sandy MacDonald

“You, it seems, have been caught inside an intermission-free, 1 hour 50 minute singing version of one of those whimsical, metaphysical fantasy novels that dominate the best-seller list around Christmastime and tend to have “heaven” in their titles. Well, that or a particularly preachy episode of “The Twilight Zone.”… But despite top-grade production values and a polished cast that loads every song with from-the-heart earnestness, HAPPINESS slumps into a funk soon after it begins… Ms. Stroman is the highly variable director and choreographer whose Broadway credits embrace both the bliss of “The Producers” and the clunkiness of “Young Frankenstein.” The dances in “Happiness” are few and formulaic, and include a boogie-woogie sequence (for the World War II memory) and a sarcastic paean to Wall Street materialism stylishly led by Mr. Foster."
in the New York Times by Ben Brantley 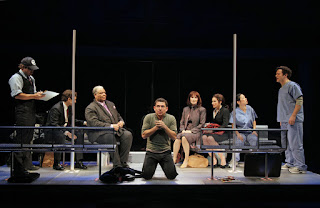 “Strangers in a New York subway car bound for -- who knows where? -- may not seem to be the most surefire bet for a musical… Yet HAPPINESS ,at Lincoln Center Theater’s intimate Mitzi E. Newhouse stage, does more than just offer 110 minutes of flawless, nonstop entertainment... Best of all, the painterly uses to which Stroman puts the stage, and her inventive choreography wherein certain fresh steps and holds eloquently convey happiness. The subway car itself dances.”
in Bloomberg.com by John Simon 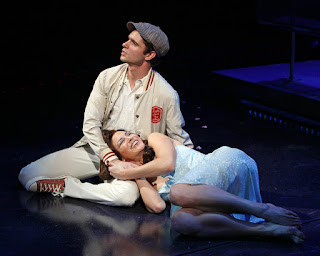 “The announcement for the frustrating new show HAPPINESS at Lincoln Center could be trimmed to "Stand clear." This is one musical ride that never leaves the station… Stroman, whose last effort was the short-lived "Young Frankenstein," fares better with setting the scenery in motion than with her cast. The train car twirls and lights up like an amusement-park ride, but her performers come off shrill… It's a given that "Happiness" will make you think about your own life, but more often you'll wonder when the final stop will arrive and the show will be over"
in Daily News by Joe Dziemianowicz 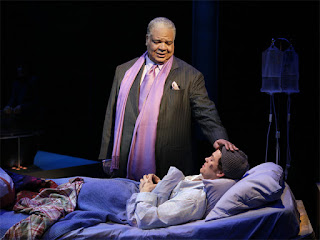 “It's easy to understand Stroman craving the freeing experience of crafting a small-scale, relatively off-the-radar show again after shepherding Mel Brooks' behemoths "The Producers" and "Young Frankenstein." But despite the best intentions of everyone involved, and the resources of Lincoln Center Theater, this underwhelming meditation on mortality doesn't resonate at all … But there's no real life onstage, either in the cardboard characters or the surprisingly tentative dance interludes… And try as Stroman might to get some emotional momentum going, it never really gels… Perhaps the show's fragility wouldn't have been quite so glaring in a more modest, bare-bones production. But nice as it would be to greet a new musical that has charm and originality, this one barely scrapes by on either count.”
in Variety by David Rooney 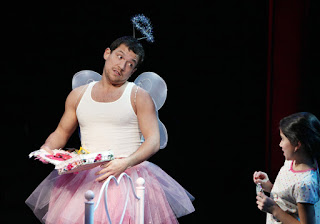 “But at least Weidman and director/choreographer Susan Stroman -- in their first joint outing since 2000's "Contact" -- strive to engage with our city's very fabric… And the first half-hour largely pays off. Swiftly redeeming herself from "Young Frankenstein," Stroman stages a kinetic number, "Just Not Right Now," in which she simultaneously introduces all the characters and immerses them in the hectic flow of a typical city morning. She nails it again with the swinging 1944 flashback "Flibberty Jibbers and Wobbly Knees."… After that, the dancing inexplicably subsides and the show settles into a predictable rhythm as each character strolls down memory lane. And I mean strolls: HAPPINESS feels too long at an intermissionless 110 minutes.”
in the New York Post by Elisabeth Vincentelli 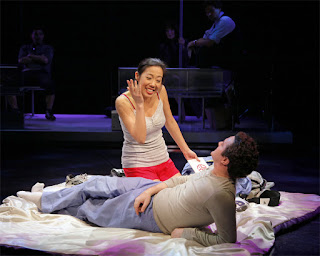 “Oh, dear. As if the MTA didn't have enough trouble, here comes "Happiness" - Susan Stroman's disappointing new musical about nine New Yorkers stuck in a subway car… Stroman - also known as Mel Brooks' favorite director/choreographer - seems intent on making a show without much dancing this time. The subway car (sets by Thomas Lynch) does move, as do the becoming costumes (by William Ivey Long)… "
in newsday.com by Linda Winer

“… a new American musical not based on a source in another medium. All of which makes it frustrating to report that, unhappily, HAPPINESS falters… Weidman, forced by the conceit into a predictable structure, adeptly disguises it. He's helped by Stroman's virtuoso staging, which turns an inherently static situation into a kaleidoscope of shifting perspectives, with assistance from Thomas Lynch's motorized set, Donald Holder's acute lighting, and Joshua Frankel's projections.”
in backstage.com by Erik Haagensen 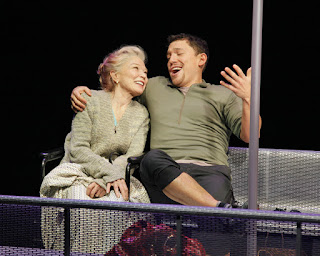 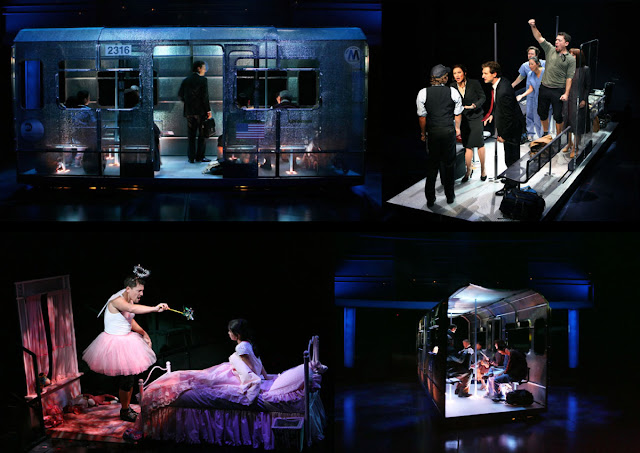