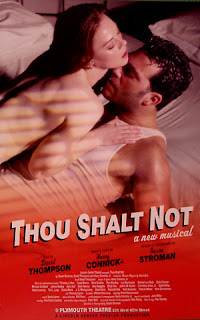 "Susan Stroman has dreamed up a couple dozen marvelous ideas for THOU SHALT NOT, an adaptation of Emile Zola's THÉRÈSE RAQUIN... In realizing her wish, Stroman has executed some eye-popping, jaw-dropping thou-shalts; the problem is that, when it comes to big musicals (or any kind of musicals), you need a hundred or more thou-shalts, a tally she reached in THE PRODUCERS."
in TheatreMania.com by David Finkle

"Stroman puts to effective use the turntables-within-turntables of Thomas Lynch's darkly-lit, evocative sets, but while she has studiously avoided the props and gimmicks that are her trademark, her work here verges on the arty and pretentious. And her triumph with CONTACT may have led her to believe that her dances would be enough to convey the emotional content of the source material; she hasn't bothered to secure a book and, more crucially, a score to support her".
in Broadway.com by Ken Mandelbaum

"After mouting CONTACT, THE MUSIC MAN and THE PRODUCERS, Susan Stroman's winning streak has finnaly come to an end. Which isn't to say that she hasn't created some interesting work here. Besides a few superb special effects, Stroman's intricately choreographed sequences are the only things worth watching. The clever modern dance invoking Mardi Gras is one of the boldest movement pieces Stroman has ever choreographed on Broadway."
in Time Out - New York by Jason Zinoman