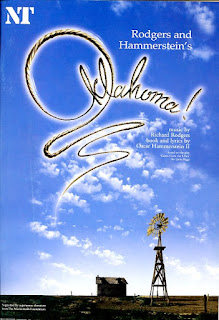 "Palpable waves of pleasure as the audience surrendered to the spell of Trevor Nunn's production... with Susan Stroman's electrifying choreography... and a brilliant score."
in "New York Post"

"Stroman was brought in to ensure a fresh approach to the dance numbers and she certainly succeeded, offering several memorable moments. The routine accompanying 'Kansas City', which at one point appears to descend into organised chaos, is a terrific feat of choreography, while 'The and the Cowman', possesses so much life and energy that it almost encouraged the somewhat staid National´s audience to their feet"
in "Show Music" by Mike Gibb 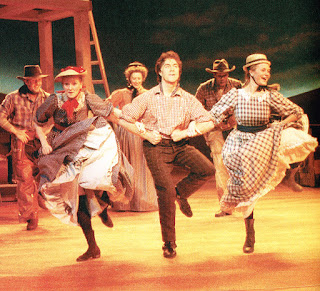 ''Stroman's timing is impeccable, building a routine from a simple gesture into a full ensemble number, adding in props, kids, reprises, climaxes.''
in The Observer by Jann Parry

“Susan Stroman’s choreography, with the single exception of the new and barely adequate “Out of My Dreams” ballet, is seemingly a rehash of every move that didn’t particularly work in any of her prior shows.”
in talkinbroadway by Thomas Burke 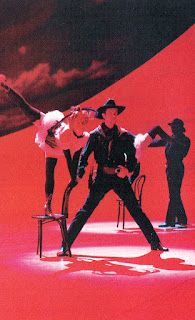 “His (Justin Bohon) exuberant rope dance in “Kansas City” is a highlight of the first act, and his joyous effervescence tends to draw the eye in the rest of Stroman’s athletic hoedowns, too… These do not disappoint, and when the show hits its stride in the big dance ensembles, it is impossible not to be swept up by the juicy vernacular movement that Stroman integrates into her dances. Stroman mostly eschews Agnes de Mille-style stylization, and places classical ballet movement in perky contrast to more rough-hewn choreography in her version of the show’s big dream ballet, which begins enticingly with Laurey waking to find a chorus of fingers poking through corn stalks, beckoning her into her dream world.”
in Variety by Charles Isherwood